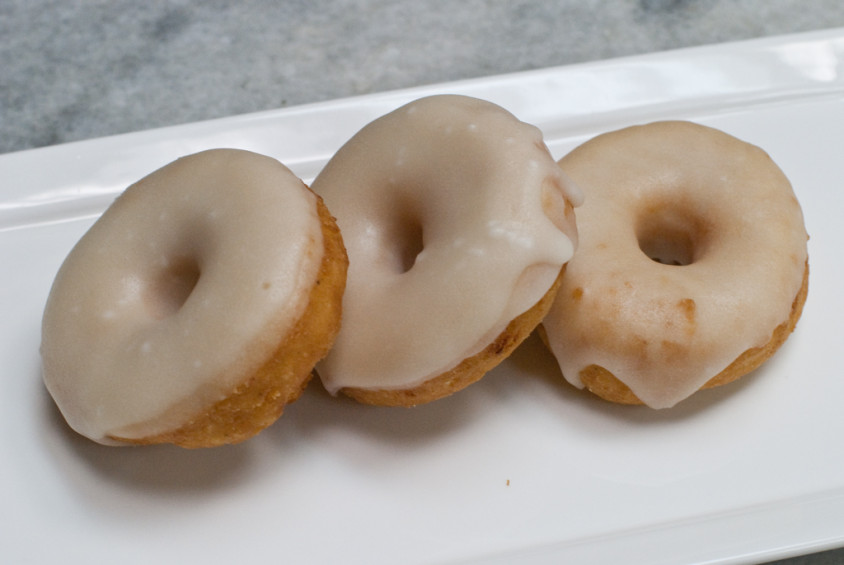 I am sure many of you are scratching your head about adding potatoes to your donut dough but I promise it is one of the best flavors you will ever sink you teeth into.  Potato donuts are tender and moist especially if you use freshly harvested potatoes that are in season right now.  These taste so much better than store bought and you do not need to wait around for the HOT sign to light up; the creamy dough with Meyer lemon glaze just melts in your mouth.  If you do not believe me, make a reservation at Park 75 Restaurant at Four Seasons Hotel Atlanta and request these donuts be on the menu.  You will not be disappointed.

I met with Charles Barrett, the pastry chef of Park 75 to make these decadent donuts since they were so well received at the Morningside Market.  He walked me through each of the steps in detail so everyone can make restaurant quality donuts on their first try.  We made the traditional fried donuts as well as baked a batch.  The baked ones do not have the same finish as a fried donut but taste pretty close to the original, especially if you brush a little butter on them right after they come out of the oven. 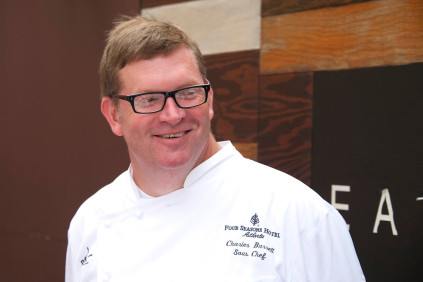 Park 75 is one of the few true farm-to-table restaurants in Atlanta.  They have gardens on the fifth floor terrace and bee hives to pollinate the herbs and vegetables.  They serve the honey in the cocktails and many desserts.  Charles let me sample the salted honey caramels and they taste like sunshine in your mouth. They even grind and roast cocoa beans to make their own chocolate bars. 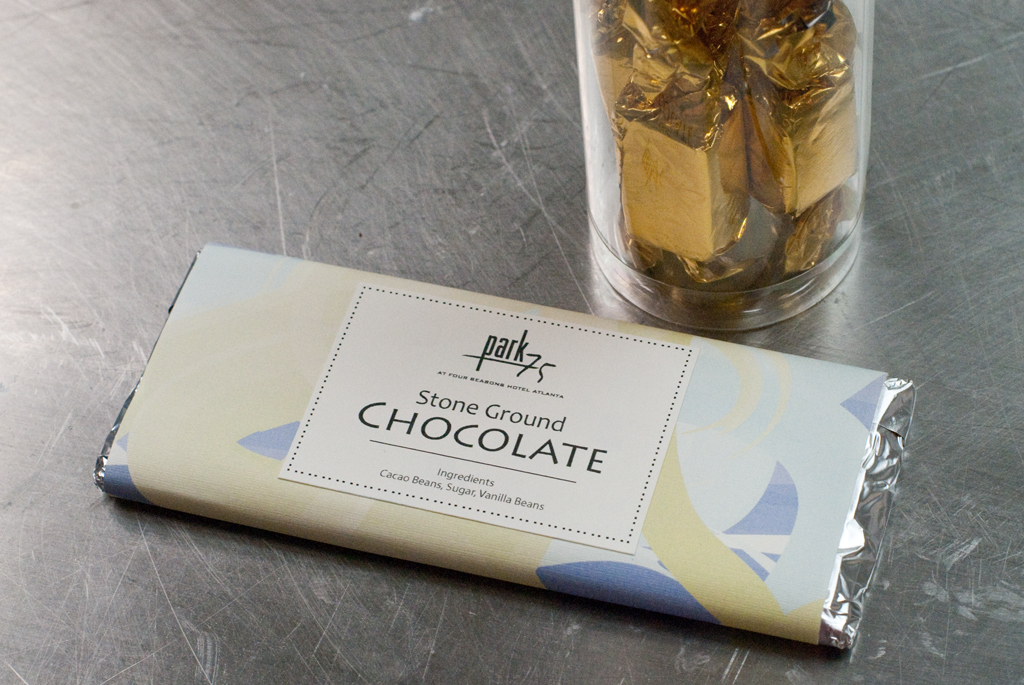 Charles loves working for the Four Seasons since it is an International Hotel with a local feel.  He reminisces about Sunday ice cream social, rich pound cakes, barbecues, and boiled peanuts from his youth and is able to reinvent these comfort foods within the hotel.  He even created a Hot Chocolate Bomb which is filled with chocolate, cocoa and marshmallows which “blows up” when steamed milk is poured over the top releasing all the goodness in a fine cup of Hot Chocolate.

You do not need to get dressed to the nines to go to the Four Seasons.  It is a very casual restaurant where foodies go to indulge in seasonal delights.  I cannot wait to plan an evening with close friends on the fifth floor terrace where they nestle parchment lined tables in between the gardens and serve food picked that day for the entrees. 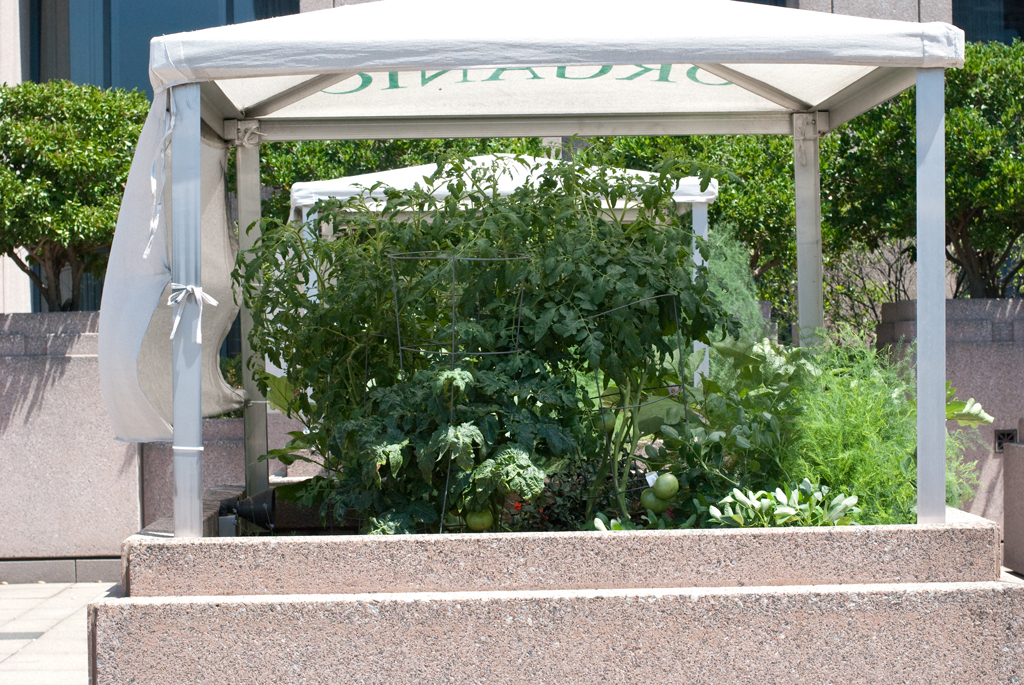 1) Cook the Potatoes- Boil whole potatoes with the skin on until tender or roast the potatoes in the oven. Boiling should take about 15-20 minutes for smaller potatoes.  Let cool and then peel the skins.  Use the skins for another recipe; they contain so many vitamins.  Use a food mill, potato ricer or a cheese grater to rice the potatoes into fine pieces almost like hash browns. Store or use immediately.  You can refrigerate the potatoes for this recipe if you cook them ahead of time. 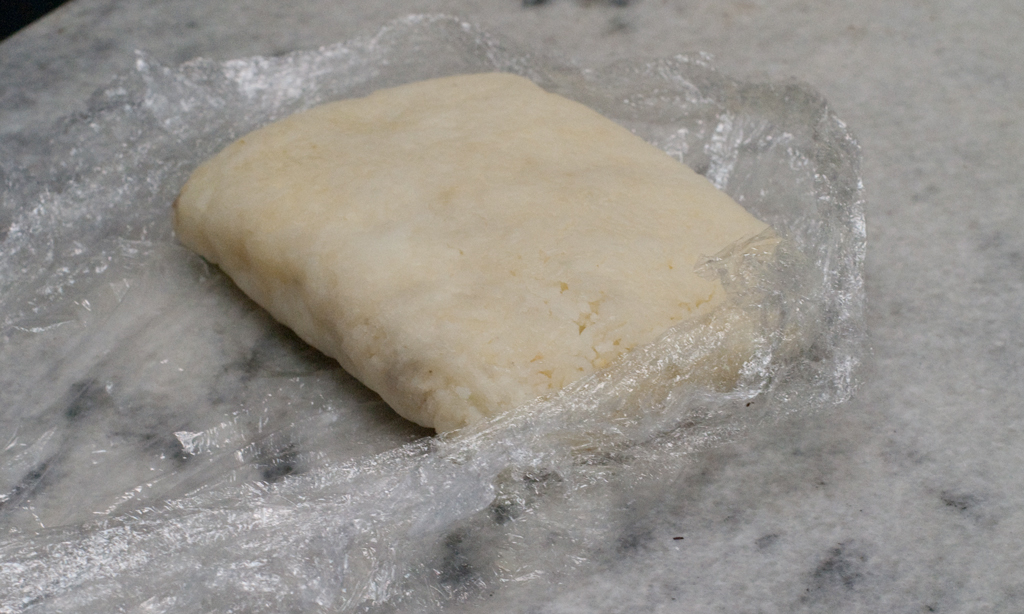 2) Making the Donut Batter- Cream the shortening and the sugar until a sandy consistency.  Add the eggs and sour cream until it looks like a broken hollandaise sauce, i.e. not smooth.  Add the flour and potatoes to the batter until just incorporated.  It will feel sticky and wet like a buttermilk biscuit dough.  Do not turn your mixer on high or you will over exercise the dough causing gluten to form and the donuts will be tough.  Note: It is better to add the potatoes when they are at room temperature. If they are warm, it will melt the shortening and change the consistency. Cold potatoes are ok but not ideal. 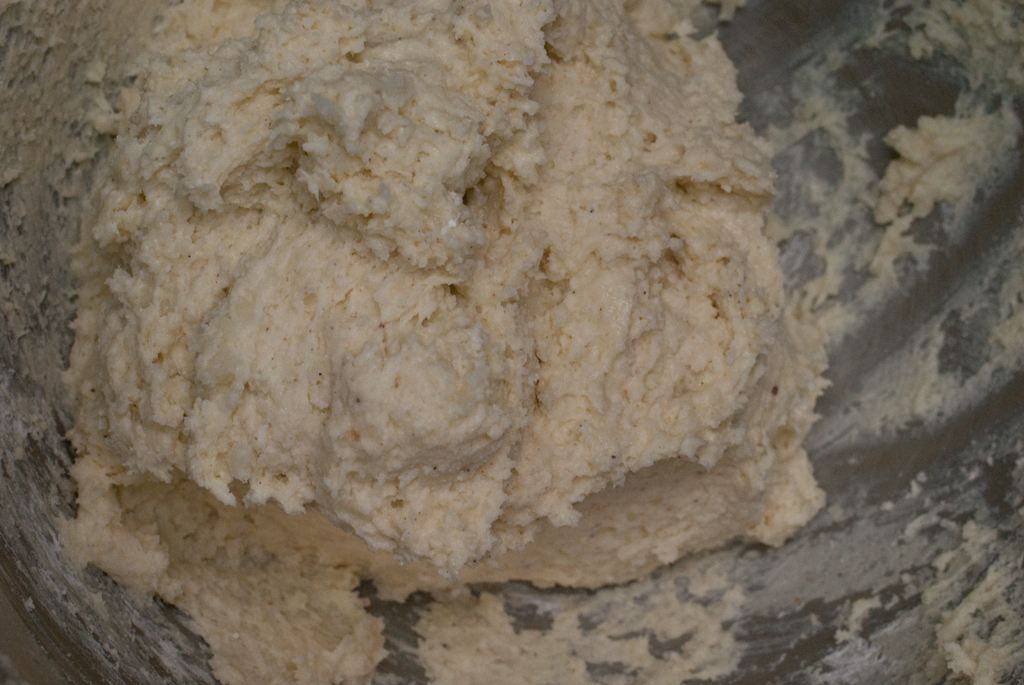 3) Create the Donut Shape- Roll out the dough to about 1/2 inch in thickness.  Use a large round cookie cutter to cut out the donut and a smaller one to remove the hole.  You can cook the holes too if you wish.  Roll out the leftover dough and repeat cutting out the shapes. You can do this a third time but it is best to pat the dough with your hands instead of rolling with a pin; you form gluten each time you roll and the donuts become tougher.  Use a spatula or scraper to move the donuts to the baking sheet or frying basket.  Chill briefly. 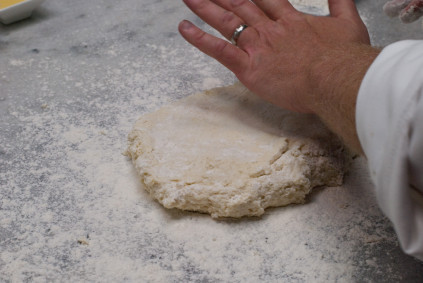 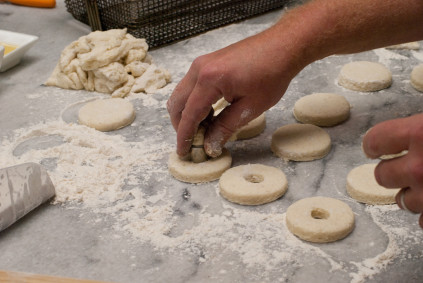 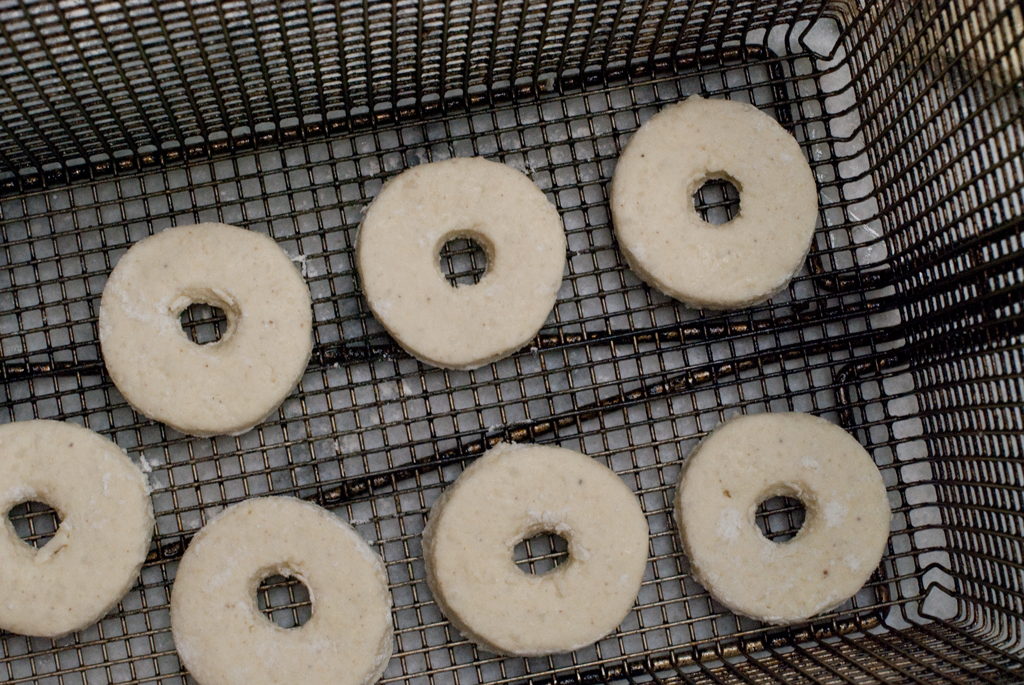 4)Bake - Preheat the oven to 375 standard or 350 convection.  Bake the donuts on a parchment lined baking sheet for about 12 minutes or until golden brown.  Break one apart to make sure they are cooked all the way through. Brush with melted butter and let cool to dip in the glaze. 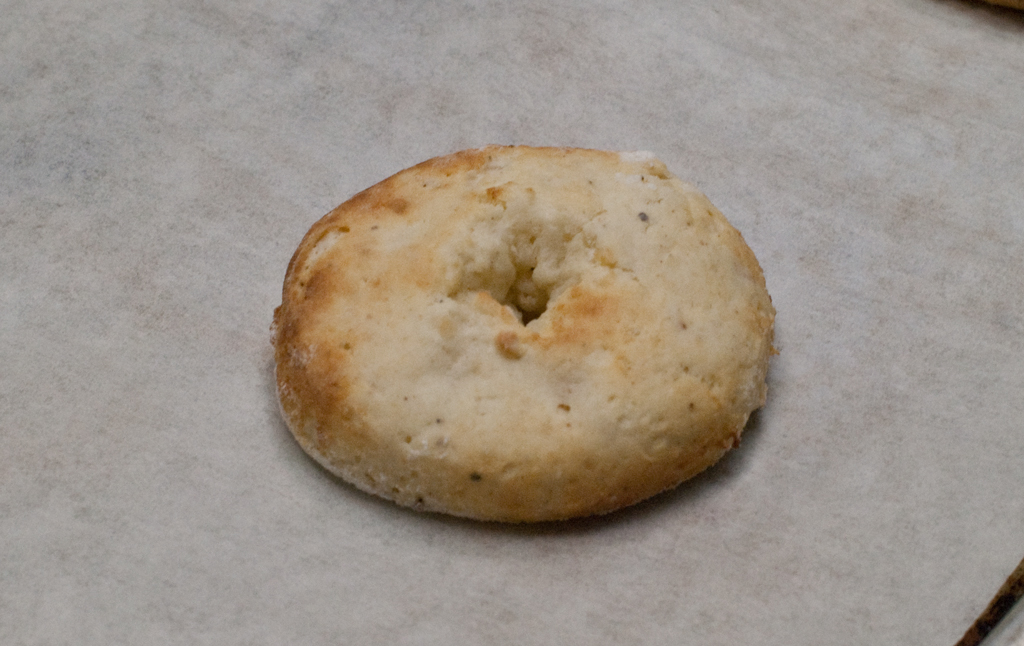 Or Fry- Heat peanut or canola oil, preferably organic and non-GMO in a large pan.  Submerge the donuts into the oil and cook for 40 seconds to 1 minute and then flip the donut. Cook for a total of 2 to 3 minutes until golden brown.  Break one open to make sure they are not stodgy or doughy in the middle.  Set aside to cool on a paper towel. 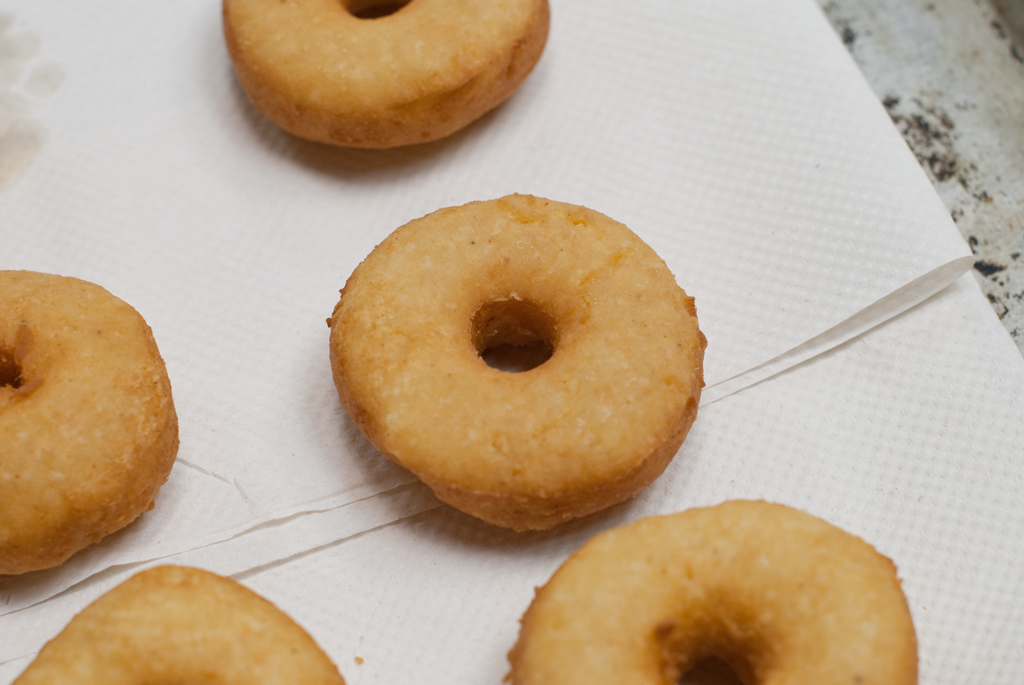 5) Glaze- Use a fork or a stiff whisk to blend the powdered sugar, pinch of salt, and melted butter.  I recommend the Back to Organic Lemon Twist Himalayan.  Add the lemon juice and evaporated milk and stir.  The sugar will start to dissolve and the icing will become smooth.  It will be pasty.  Add water to thin; aim for the consistency of yogurt.  Transfer to a microwavable, wide, shallow bowl and nuke for 1 minute.  Do not heat the glaze again. 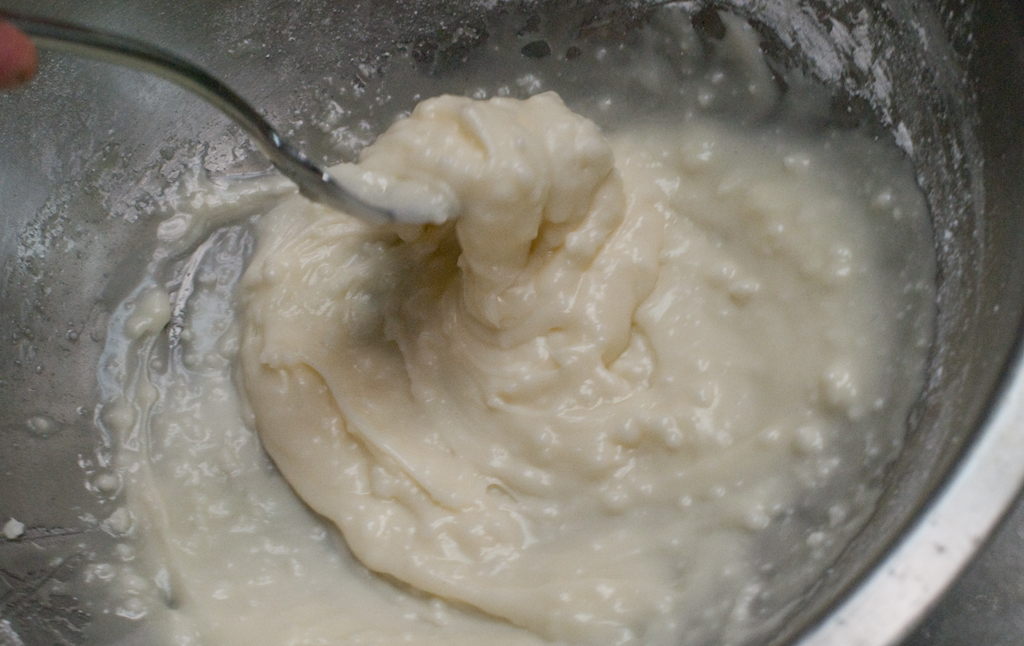 6) Dip the Donuts- Gently lower the donuts into the bowl of glaze.  Do not let your fingers touch the glaze or you may get burned.  If the glaze is too thin for your taste, double dip the donut. This time it is acceptable! 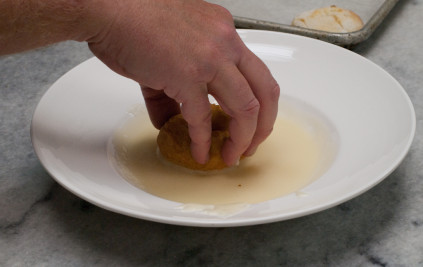 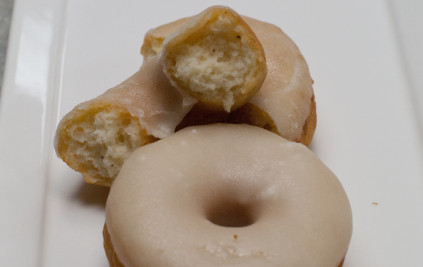 7) Decorate with Colors (optional)- Remove some glaze from the large bowl and add a little food coloring to the glaze. Use a piece of parchment and cut into a triangle.  Create a ice cream cone shape and tuck the pointed piece of parchment at the opening into the cone shape. Fill the glaze half way in the cone.  After you fill with colored icing, fold the paper down away from the seam but keep the seam pointed upwards to ensure it stays close while you press on the parchment bag to decorate the donuts. 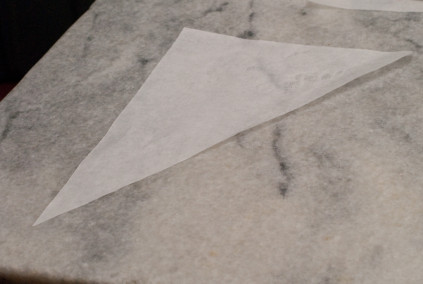 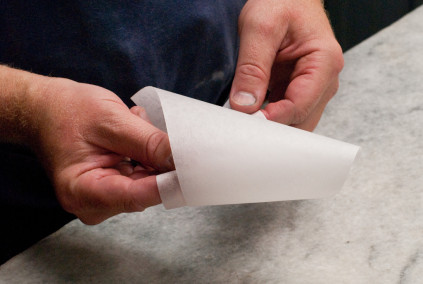 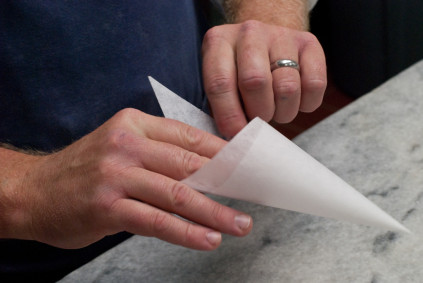 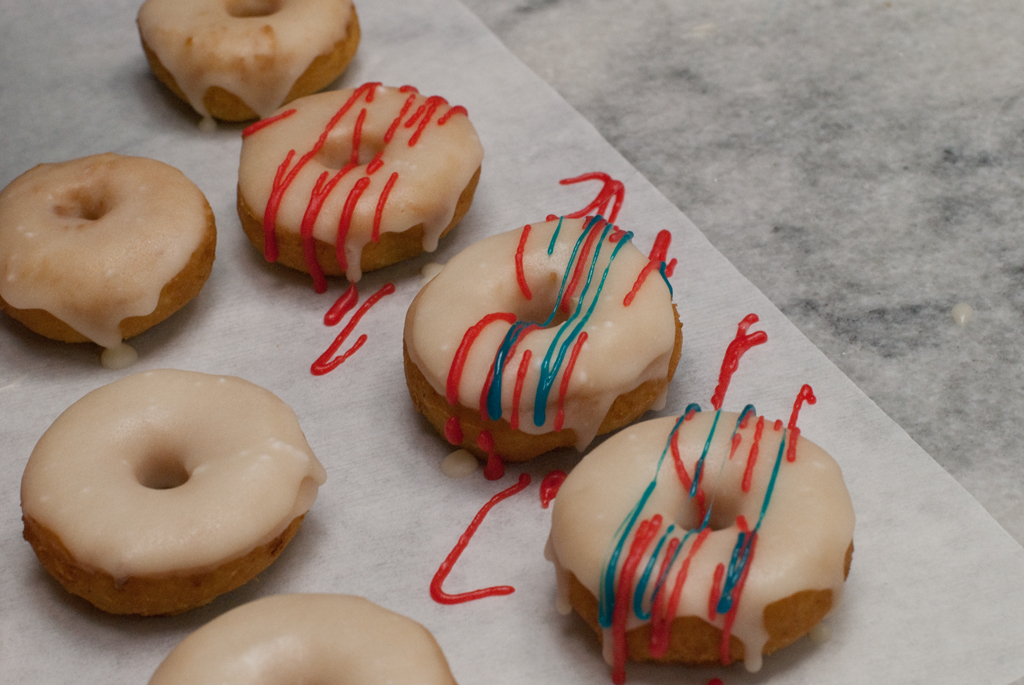 Featured Back to Organic Gourmet Salt 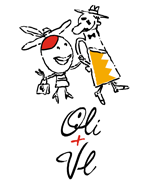 Recipe by Back To Organic at https://www.backtoorganic.com/creamy-potato-donuts-with-a-meyer-lemon-glaze/
Copyright © 2012 - BackToOrganic Based on FoodPress Theme by Sebastian Rosenkvist